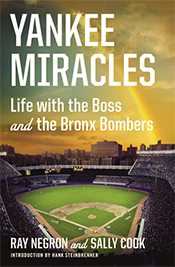 Yankee Miracles:
Life with the Boss and the Bronx Bombers

If it was not all so true, you’d think it was a fairy tale. A seventeen-year-old from Queens spray paints graffiti on Yankee Stadium and gets nabbed by George Steinbrenner himself. Contrary to his gruff public image, the Boss—driven by a compassionate inner voice—reclaims the teen at a time when the Bronx is literally burning. Thus begins the unlikeliest of baseball stories, one in which Ray Negron is transformed from street kid to batboy and beyond. 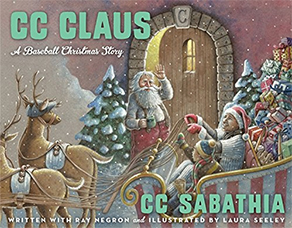 For readers of all ages comes A sweet holiday story of how beloved New York Yankee star pitcher CC Sabathia, his son Carsten, and a few of baseball's most legendary players save Christmas!

While reading fan mail with his oldest son, Carsten, on Christmas Eve, CC Sabathia finds a letter addressed to Santa from a little girl whose family has lost everything in a flood. To help make the little girl's Christmas wishes come true, CC and Carsten head to the North Pole to deliver the letter to Santa. But Santa and his elves might be too overwhelmed to finish presents for another family this close to Christmas! 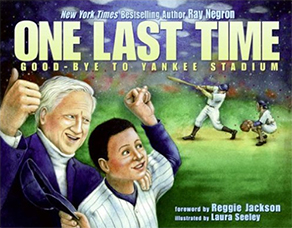 $10 including sales tax and $5 shipping

In One Last Time: Good-bye to Yankee Stadium, Ray Negron and Laura Seeley, the New York Times bestselling team that created The Boy of Steel and The Greatest Story Never Told: The Babe and Jackie, pay tribute to the ballpark that housed so many Yankee greats and welcome the new stadium that will be home to future baseball heroes.

The Boy of Steel: A Baseball Dream Come True

Young Michael Steel loves to watch the New York Yankees on TV—from his hospital bed. Michael has brain cancer. But when Yankee second baseman Robinson Cano visits Michael in the hospital, Michael embarks on an unexpected and wonderful journey when he becomes a Yankee batboy for a day. It's his baseball dream come true! 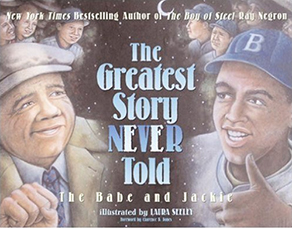 The Greatest Story Never Told
The Babe and Jackie

Skippy and Connor don't like each other. In fact, each of them wants a new roommate because the other is too "different." Stuck in the hospital with serious illnesses, the boys get a surprise visit from Ray, a Yankee batboy who whisks them away on a magical journey back in time to meet the legendary Babe Ruth. The adventure doesn't stop there, as the Bambino takes them to see baseball hero Jackie Robinson play at Ebbets Field. Along the way, the Babe and Jackie share some unforgettable lessons with their young friends about baseball, friendship, and accepting others' differences.