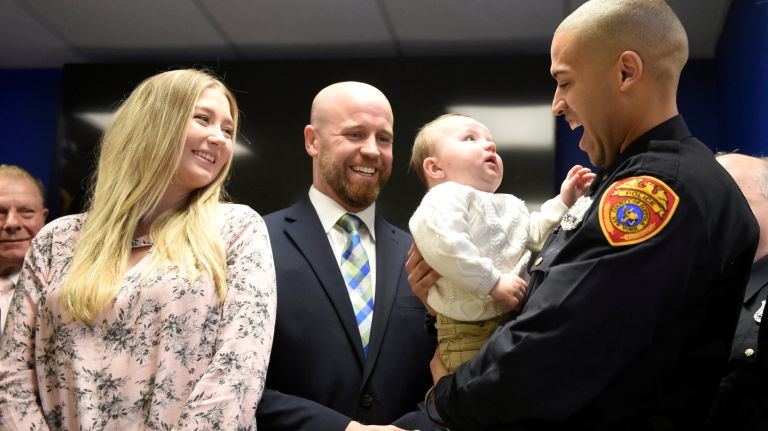 First responders reunite with baby they saved when he was born

By Craig Schneider of Newsday

Mike Pappalardo’s voice cracked with emotion as he thanked the Suffolk County police, fire and emergency workers who helped save his baby boy the day he was born.

“He might not be here today,” the Mount Sinai father told the officers, dispatchers and others during a news conference Thursday at police headquarters in Yaphank.

Five months ago, at just about midnight, his wife, Jane Pappalardo, 31, told him that her water had broken and they needed to move fast. The baby had his own timetable, and the next thing they knew mom was giving birth on the kitchen floor.

A call to 911 led to Steve Platz, a dispatcher for the county fire and emergency rescue department. Over the phone, Platz helped Mike Pappalardo, a 38-year-old special education teacher, keep his cool when dad discovered the umbilical cord wrapped around the baby’s neck.

“We worked to pull the cord off the baby’s neck,” Platz recalled.

When several attempts to remove the cord failed, Mike Pappalardo just snapped it with his hands.

He realized the newborn wasn’t breathing. Enter dispatched Police Officer Jon-Erik Negron, as if arriving on cue. The father grabbed him, and said, “What do we do?”

Negron knew the baby’s airway needed to be cleared. And quickly. A household syringe did the trick.

When Bryce took his first breaths, Negron said, “It was the most unbelievable sound.”

Five months later on Thursday, there was little Bryce at the big news conference, his green eyes looking quizzically at the snouts of the media cameras trained upon him.

The baby seemed oblivious as officials tapped his tragedy-turned-triumph into broader themes.

County Executive Steve Bellone said first responders perform such life-saving work every day. He stopped for a moment, just to recognize how Bryce was so well-behaved.

Through it all, Bryce sat happily perched in the arms of his mother, swaddled in a white sweater, tan pants and baby blue socks, and thoroughly enjoying his green pacifier.

Then his mother placed the baby in the arms of the police officer who helped him into this world. Negron was clearly wowed by the moment. Bryce, now a healthy 19 pounds, looked him right in the eye.

And the two, forever linked by an incredible moment, continued that bond.