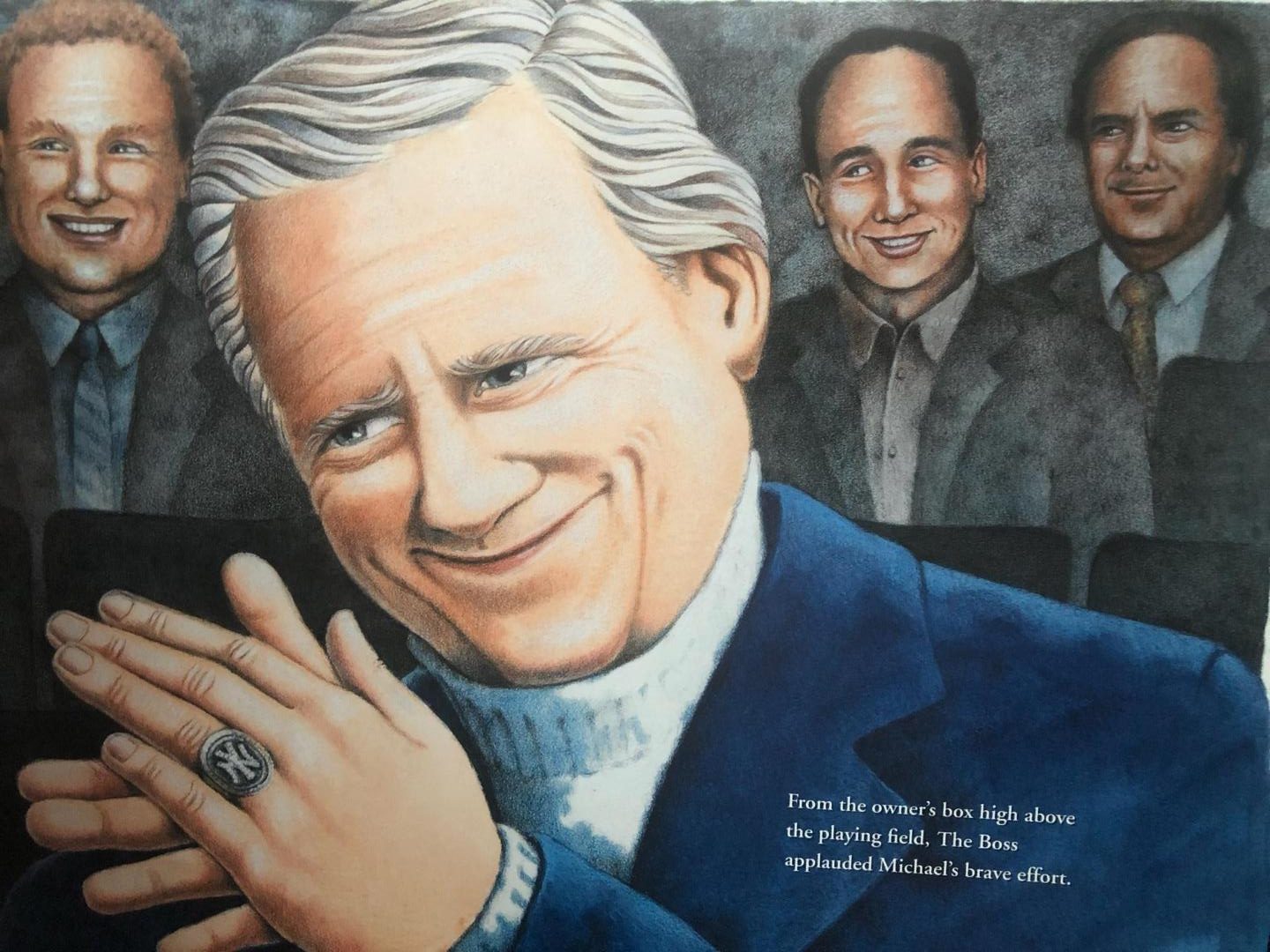 When the great George M. Steinbrenner passed away in July of 2010, I felt like my world was crushed. The man that had literally given me a life in the incredible sport of baseball was gone. Through him, I learned that baseball was more than a game. He also taught me that if I believed in myself, there wasn’t anything that I couldn’t do.

One day I was standing in George’s office at the old Yankee Stadium with about 20 of his college buddies. You’re talking about guys that attended Brown University, Yale , Dartmouth, Ohio State …you name it. As these high level individuals were talking about their academic achievements, I felt terribly out of place. At that moment the Boss noticed me just staring down, so all of a sudden, in his thunderous voice, he screamed out ‘Negrón put your head up.’ He then said ‘I know what you’re thinking. Don’t you realize that you went to the greatest University of all?’ At that moment I said to myself ‘what is this madman talking about?’ At that instance he said, ‘You went to the University of Steinbrenner at Yankee Stadium.’ I can honestly say that I wasn’t embarrassed anymore. Even though everyone was laughing, I know that in his heart the Boss meant it. He always tried to make me feel good about myself especially with the fact that when he first got me off the streets, I was dealing with a very bad case of low self esteem.

Throughout the years he let me get involved with different film projects, at times even introducing me to some Hollywood producers that would give me film parts. He even allowed me to get started in writing my children’s books.

The thing that I loved the most was the “bird’s eye” view I got of how he ran the great Yankee Empire. How he loved the magnitude of owning sports’ greatest team. He also talked about how he wanted for the Yankees to be beloved long after he was gone.

In my mind George Steinbrenner would never die because to me he was like a God. Well unfortunately there is only one God and the Boss did die. Next to my parents dying, that, and Thurman Munson dying, was the worst day of my life.

I walked in a daze for a week. I couldn’t imagine the world without the Boss. Remember that I had been around this “Giant” for 37 years. Selfishly I wondered what would happen to me now that he was gone. I actually got into a mental funk. I wondered how the Yankees would keep going. Would everything fall apart?

The thing that I wasn’t aware of was, that in his own way, the Boss was preparing for when he would no longer be there any longer.

In the 1980s he hired an intern from Kentucky that would learn every part of the baseball operations and he would work with all of the Boss’s great baseball people, including Gene Michael. To date, he has become the longest tenured General Manager. That man is Brian Cashman. On a personal note, one of the reasons that I like this man so much is when he first came to work for the Yankees, he wasn’t afraid to live in the south Bronx.

In 1963, there was a Stadium vendor selling hot chocolate and god knows what else. He was a kid that came from East New York in Brooklyn. At that time (and to this day) it was the toughest neighborhood in New York. He worked his way through College, got his law degree, went to work for some big time law firms including Shea Gould. He started doing some legal work for the Yankees in 1976 and has been our Chief Operating Officer for over 20 years. He has gone on to do some incredible things for the Yankee brand. His name is Lonn Trost.

Then there is a gentleman who was working for former Mayor Rudy Giuliani from 1997-2000 as the Deputy Mayor for Economic Development, Planning and Administration . This man was also involved with the big labor movement in Major League Baseball. I was told that, in high school, he was a hot shot basketball player. The thing that the Boss told me that he liked about this guy was that he reminded him of himself. The Boss always liked to think of himself as one very tough hombre. And yes ladies and gentlemen he was and so is this man. His name is Randy Levine, the President of the New York Yankees.

For that matter, all three of them can be very tough guys. These guys will not be pushed around. I can honestly say that that is something that the Boss wanted in his top soldiers. The other thing that was very important to the Boss was that these men always do the right thing by the common man. I think they have more than done that. No organization in sports or any business for that matter has done more to help so many people like the Yankees.

In 2005 George Steinbrenner gave me the go ahead to do my first children’s book. It was called ‘The Boy of Steel.’ When I completed that book and was going over the art work, there was one picture missing, one of the Boss.

When my artist did the picture of the Boss, she looked at me and asked me what’s wrong? I said there is something missing. She asked me what it was. I said that the picture would not be complete without The Boss’s three top soldiers from his Empire. I don’t know if it was a premonition or what but that picture won us some book awards and the book went on to become the international children’s book of the year, beating out, I’m proud to say, Gloria Estefan’s great children’s book that year.

With the success of that book, out came the haters. One unnamed person actually said that he wrote the book because he gave me some advice on it, as had others. This angered the Boss so much that he told me to do another book just to show everyone that I wasn’t a fluke. Well I ended up doing three more, one better than the next.

Getting back to the Boss’s three hombres, I can honestly say that the Boss would be so proud at how these men have run the Boss’s Mona Lisa. How they have helped guide the Steinbrenner family well into the 21st century with the advancement of the YES TV Network and all the great entertainment projects including soccer matches and musical concerts.

Like many people, I miss the Boss dearly but I’m blessed to be able to be around the people that refuse to forget the greatness of George M. Steinbrenner. It’s wonderful that they truly help to keep his dream alive.