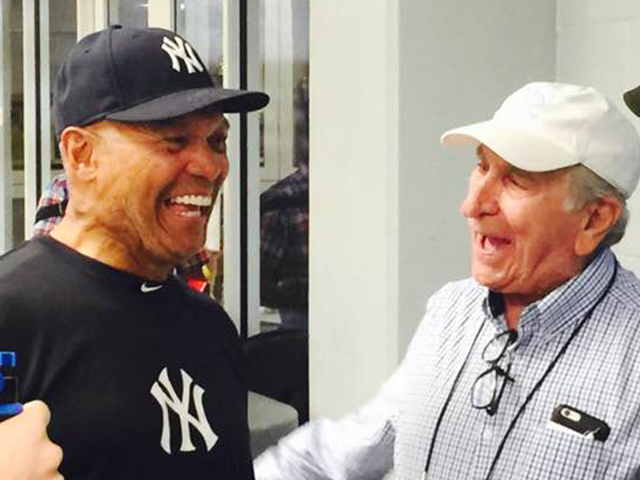 Tampa: A documentary has been in the works for some time now on the life of Super Scout Tom Giordano and the world of Major League Baseball scouts. Everyone from Atlanta Braves President John Hart to all-time hits leader Pete Rose are featured in this documentary.

The greatest second baseman of all-time, Roberto Alomar gives a testimonial with passion  about Giordano who is known by his peers as “T-Bone.” The documentary traces the home run race between “T-Bone” and Hank Aaron in the 1953 minor league baseball season right up to the time where he signs the beloved Baltimore Orioles Hall of Famer Cal Ripken Jr.

When “T-Bone” was told that Reggie Jackson was going to take part in this film he could not have been happier. Through the years they have always had a very special bond. Many baseball insiders remember that Giordano was a big reason why the Orioles made the trade for Jackson in 1976 and after the season Reggie presented Giordano with his Number 9 uniform shirt as a token of thank you.

When Reggie was asked if he would take part in this documentary at first, he questioned it but when he found out it was about “T-Bone” he jumped at the opportunity to let the world know what a wonderful human being this great baseball veteran has been.

Reggie looks at “T-Bone” today as if he was a father to him. The fact that “T-Bone” at the age of 92 has been in baseball over 70 years, Reggie mentioned, that must be some type of Guinness Book of World Records.

Another longtime baseball official who did not want to be identified mentioned there should be a special wing in the Baseball Hall of Fame in Cooperstown for people like Tom Giordano, almost like they have at the Ted Williams Hall of Fame in St. Petersburgh Florida where ‘T-Bone” has a prominent display.

As “Mr. October” finished his heartfelt interview you could hear him say the days of the Tom Giordano’s and all the great scouts are a thing of the past and we will not see another “T-Bone” again.

Let’s enjoy this one while we have him.

Weekends With Ray on ESPN Deportes 1050 AM from 12-2pm. You can also read Ray on Newsmax.