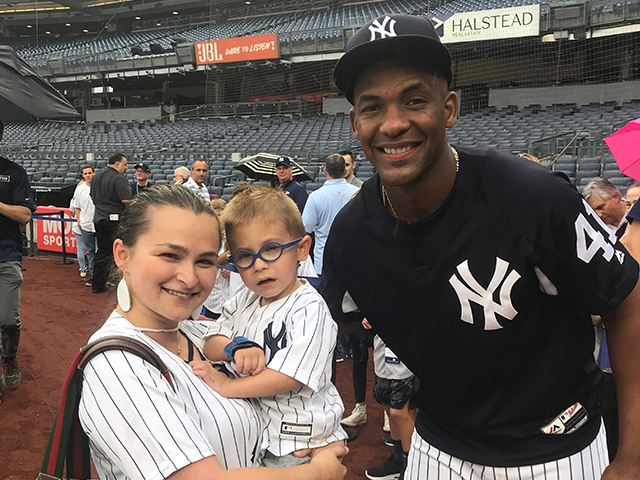 Lucas Spina is a 4 year old boy with hydrocephalus and cerebral palsy. He has had 12 brain operations within the last 12 months. His momma, Danielle wants awareness in the pediatric community because of the underfunding and also because of the fact that there is no cure.

Lucas on the other hand is just happy to be at Yankee Stadium visiting his hero’s. The first Yankee to visit him was the young rookie Miguel Andujar.

When Andujar noticed one of the scars on Lucas head, you could tell that he was visibly touched.

He asked me what was the situation and after I explained he said that his love was with Lucas.

Through the rain and the help of all the Yankee good hearts Lucas and his mom had a day that they can always look back on and the pictures to prove it.

Nicholas Pedone Jr was seven years old when we lost him to a cancer known as neuroblastoma.

This week would of been his 12 th birthday. His parents Nick and Josephine told me that he was a gigantic Yankee fan and he loved Derek Jeter. His mom said that in her heart, little Nick would of transferred over to Aaron Judge now that Jeter was retired. My long time friend , Hall of fame artist John Pennisi told me about the Pedones and ask if it was possible for them to receive a special painting that he did in honor of their son. With the help of the wonderful Gleyber Torres and Coach Marcus Tymes the Pedones were totally surprised on little Nicks birthday with the portrait. What made it even better was that later in the evening Gleyber homered and dedicated it to the Pedone family.

I guess you can call it Yankee Magic.

Gleyber and Andujar understand their roles

Gleyber Torres and Miguel Andujar were two rookies that going into spring training were not supposed to make the Yankees. However due to circumstances beyond anyone’s control have become two of the biggest baseball stars in New York. With that fame and success on the field they continue to understand the importance in being a Yankee off the field. They understand before games , the importance in extending their hands to so many of the young people that come early to the park. They also have gotten to understand that some of these kids have medical issues and need a little extra sympathy and love. I can honestly say that I’m happy for these two young men and hope that they continue to make the people of New York proud. At the same time New York is very lucky to have them.