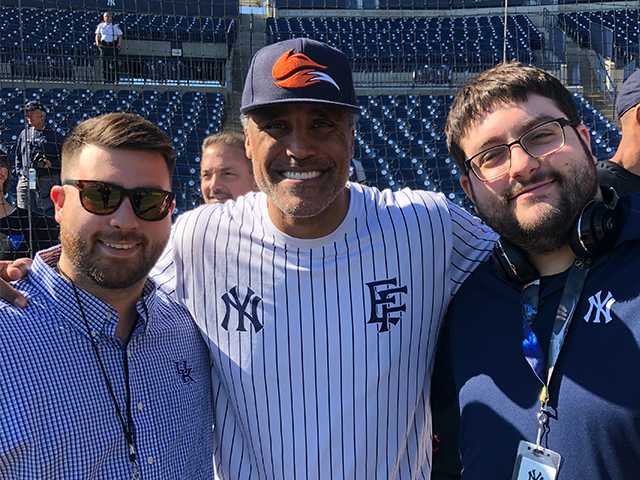 Vision eSports Ready to Blow Up in Yankee Universe

The New York Yankees hosted “Echo Fox” during their final Spring Training weekend in Tampa as an introductory “eSports” day for the Yankee fan base. As one of the first investors in “Vision eSports,” the New York Yankees are dedicated to engaging as an active partner through various opportunities, beginning with this weekend’s event.

This is the new generation of Steinbrenner. Last year, you saw George Michael Steinbrenner, one of the Boss’ grandsons, enter the car racing arena with the Mario Andretti racing team and have had success by winning the St. Petersburg Grand Prix. You also saw Robert Molloy as a producer of two major motion pictures “The Little Mermaid” and “Stano” which should premier this summer.

Now we have Michael Molloy, another of Mr. Steinbrenner’s grand kids, team up with NBA basketball great Rick Fox in the very exciting “Vision eSports.”

I conducted a “Q & A” with Rick Fox about this exciting sport that had some of the Yankee players, including Greg Bird, on the edge of their seats as they were manning their hand controls.

Rick went on to explain his and Michael Molloy’s vision.

Negron: The Steinbrenner family has been very excited about what you guys have put together. Could you tell me just a little bit about it?

Fox: Well, it’s been an honor and a huge compliment for the Yankees and the Steinbrenner family to consider partnership with “Echo Fox” and we have been growing the last few years as an organization. I’ve brought “eSports” to a traditional sport capacity where it’s respected and our athletes are appreciated. And now we get to come and experience, and they get to share the day here at Spring Training to see how the Yankee athletes prepare themselves and hopefully those two walls blend and they continue to grow as pro athletes.

Negron: Rick, I’m not going to lie to you, I was always a fan of yours when you played in the NBA, also your movies. You’re a terrific actor and terrific at your commentary work, but the enthusiasm you have shown in this is at an all-time high. I mean why really?

Fox: Well, you know at the end of the day it’s competition, it’s sport, that’s genetically in my makeup. To find it again at this stage of my life in another field of play, I would say has been refreshing. My son himself is a very competitive “eSport” individual, so just being a parent and being a fuel for his passion led to me really being a part of this organization, that is, I think, forging away for a new generation of professional players.

Fox: One thousand percent. It’s been a journey to really support him as he heads into manhood. As he moved out to college, he expressed his desire to be in the video game industry and to have a career. He was searching for what that would look like, which shape that would take, and for me it was just important to be in support of that to begin with. What I found in that is not only a love for competition and sharing his passion with him but I found an entire industry and a whole bunch of kids and a whole bunch of competitors that were emerging and it allowed me to really support them as well.

Negron: The Steinbrenners are involved with “Andretti-Steinbrenner” in the car racing business. Is this the same thing, “Fox-Steinbrenner?”

Fox: Well, its championships right? It’s almost surreal to think that the collaboration like this for us has come in such a short span of time of existence, but they’ve really recognized in us an opportunity to grow together and bring what they bring, which is excellence, to our organization and help us grow to win championships on a level that you see here in the Yankee organization.

Negron: Last thing. I want the fans to know exactly what the name of the company is and how can we get a hold of you guys.

Fox: The Company is called “Echo Fox.” You can find us through echofox.gg which is on line. And if you go there you can find merchandise, you can find anything you need to know about our players, our schedules and where we compete. Look for us in “League of Legends,” “Call of Duty,” “Gears of War” all the fighting game competitions. The new H1Z1 pro series is coming April 21st in Vegas so we are growing.

Negron: Unbelievable. An incredible sport is happening. Good luck to you.

Fox: Thank you so much Ray, I appreciate it.