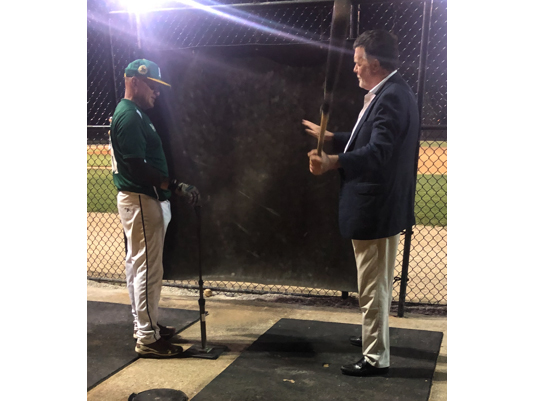 It was a warm and somewhat foggy night. Two teams are battling it out. Mostly teenagers and guys in their twenties. The only exception is 57-year old Aris Sakellaridis, the oldest guy in the league.

It had been a pretty uneventful game until the 6th inning when all of a sudden a tall figure was walking in from the right field parking lot. It seemed as if everyone stopped what they were doing to see who the figure was. It looked like an old classic picture of the great actor James Dean.

Well it wasn’t James Dean, it was Yankee co-Chairman Hank Steinbrenner who decided to come to the game to see his friend Aris play. The young players, and for that matter all the players, were blown away that Hank would come down to the field to watch everyday people play.

Aris would respond to that statement by saying that Hank is a regular person who appreciates the good in all. After Aris grounded out, Hank grabbed a bat and gave him some proper batting tips. In some of their conversation Hank even told him about proper pitching mechanics, just in case Aris would be brought in to pitch. Joking around, Hank said I’m taking over and the first thing I’m gonna do is change the name of this team from the Pandas to a more masculine name like “Bullfrogs.”

Michael Kelly is the Pandas’ designated hitter. As it turned out he had been a spring training intern for the Yankees. Now he works for the Yanks class A affiliate, the Tampa Tarpons. Kelly is the public address announcer during the Tarpons’ games.

In between at bats he got to spend time with Hank getting advice on steps he should take in order to advance in the world of sports management. Hank could not have been nicer in his advice to this aspiring young man. He was like a professor talking to his pupil.

One by one some of the other players and some parents would come over to shake Hank’s hand. As you stand next to this man and listen to him talk about different subjects you realize how much he really has to give to the world.

This morning I was watching the animated film “Henry & Me.” I had forgotten that Hank did the voice of his father, George Steinbrenner. He may have been the best actor in that film. I must add that the other actors were named Richard Gere, Luis Guzman, and two Oscar Nominated actors named Danny Aiello and Chazz Palminteri.