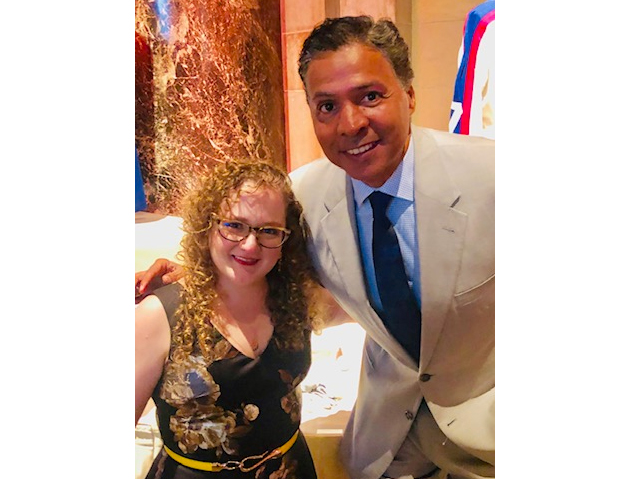 Negron: Her Heart is a Yankee Miracle

Ten years ago, I brought Yankee rookie outfielder Brett Gardner to visit some sick kids at a hospital in Manhattan. This is a tradition that was actually taught to me by the great Yankee catcher and Captain, Thurman Munson. He quietly would go to hospitals and schools as long as there would not be any fanfare surrounding the event because he didn’t want any distractions to mess up the event from the kids.

Reggie was also very good in these settings because he was never afraid to show affection towards these kids. Bobby Murcer was very sentimental when it came to visiting kids or adults in hospitals. Bobby actually showed me that it was ok to cry. The Boss, George Steinbrenner, was great because he would make the kids feel like they were his equal.

One of the great visits I got to share with a Yankee was when I had plans to visit a little boy at a hospital with Chien-Ming Wang. I got up that morning and looked at the sports page and realized that he was pitching that day. There is an unwritten rule that says that if a starting pitcher is pitching that day he is not supposed to do any kind of an appearance. So I called Wang and mentioned this to him. He immediately asked, is this visit going to be so tough that it’s going to affect my start. I said probably not but that’s the rule. Wang said look if you don’t want to come because you might get in trouble then don’t come, however I am not going to let that kid in the hospital down. So he went and I did go with him and I did get reprimanded for taking him. However, Wang did pitch a great game that night in beating the Orioles and the little boy in the hospital had a wonderful visit with the then great Yankee. It’s something that, to this day, he has never forgotten.

When I took Brett Gardner to the hospital, he met a young lady who had been waiting and praying for a heart. With each passing day things were not looking good. Brett actually got to sit in front of a lot of the kids in the hospital and read one of my children’s books. (The Greatest Story Never Told)

After finishing up and signing some autographs for everyone we started to walk out. A girl by the name of Alyssa Esposito went up to Brett and said if you take my bracelet you will hit a home run tonight. The girl said please take it because someway this might help me. Brett smiled and took it. When we got in the car, Brett said I’m not playing tonight and if I play you know I don’t hit home runs. I said, look Brett you did a wonderful job with all the kids and you never know what’s going to happen tonight. Well Brett was right, he wasn’t in the starting lineup however Johnny Damon got into an argument with the umpire and got thrown out of the game. Brett Gardner batted for Damon and he hit a fly ball down the left field line that got past Twins left fielder Denard Span and went all the way to the wall. Gardner raced all around the bases at about 100 miles an hour for the first inside the park homer at the new Yankee Stadium.

As Gardner was celebrating in the dugout, another miracle was happening. The doctors at the hospital were telling Alyssa that they had found her a heart. Ten years later she is a strong beautiful woman who is about to get married in October. She is a strong believer in God and she strongly believes that God sent Brett Gardner to the hospital that day.

Yesterday I got together with Alyssa at the Project Sunshine fundraiser. I got to meet her fiancé. I marveled at her confidence as she addressed the 800 people at the event as she thanked Project Sunshine, the Yankees, her Family and fiancé, and of course her hero who hit her the home run that she so badly needed at that time, Brett Gardner.

I guess that was just another Yankee Miracle.

A special thank you to Sally Cook from Project Sunshine for always pushing me into bringing the players to visit the kids.