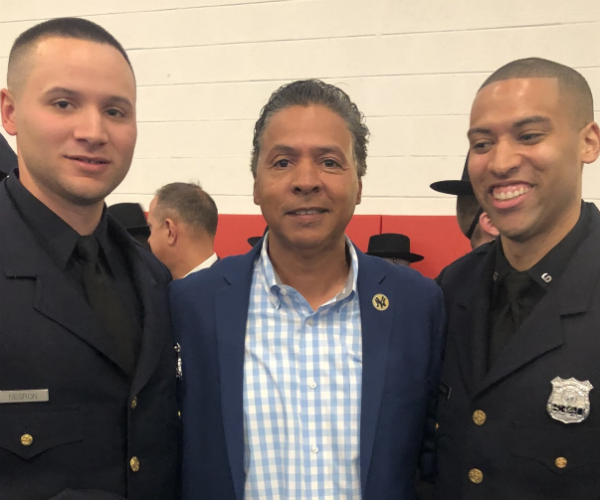 We Need to Listen, Learn, and Grow Together

I have seen New York through many of its lowest lows and highest moments in my lifetime. From “The Bronx is Burning” of the late 1970’s through the boom in this century I know we are a city of resilience.

We are a people who usually make me very proud.

Most of my life, from the time I was 17-years-old, I have also been honored to be associated with the New York Yankees; from batboy to community consultant.

It is as much a part of my DNA as my Latino blood is; that also makes me proud.

Every day I lay in bed. I don’t fall asleep until my youngest son Ricky gets home.

If my older son is working then I won’t have a comfortable night because he works at night. They are two of the most decent people that I’ve ever known.

I must add that I love them like a mother hen. I’m so proud of what they do because they are proud. They want to be the best at what they do. They both made sacrifices to become police officers. My oldest son, Jon-Erik, had a cushiony job at Chase Manhattan Bank and he was good at it. My youngest son Ricky, was playing professional baseball.

They both became Suffolk County Police Officers for the same reason: they wanted to help people. I’m not saying that Ricky was going to be an all-star baseball player because he wasn’t. However, if he had the same passion in baseball as he has at being an honorable police officer then he might have had a chance.

Throughout the years they’ve both gotten to witness firsthand my work for the Yankees.

They got to know the Yankee owner, George Steinbrenner.

They got to see him instill kindness and goodness into me so that I would share what I received from him — to others. He would tell them the importance of what I had to do in these New York communities, so that I could help humankind.

Everyone knows the story of Mr. Steinbrenner catching me outside Yankee Stadium engaging in painting graffiti. Instead of having me arrested he made me a Yankee batboy.

Yet, some people thought he was making a mistake by giving me this opportunity, but as we all got to know about the Boss, we found that you didn’t tell him what to do.

The one thing that he told me was, “Don’t you ever make me look bad.”

I once asked him how I could possibly pay him back?

He responded, “Never forget where you came from and never be afraid to extend a hand to the young people that will follow you.” I’ve always taken his words to heart and I think that my sons live by that code also.

Being a police officer is not always what you see on television.

Last week my son, Jon-Erik got a call about a mother going into labor. As a result, he delivered his fourth baby. Another time a baby wasn’t breathing and he had to clear the infant’s throat in a difficult procedure.

When the baby started to breathe Jon-Erik cried with joy.

Today — he is that child’s godfather.

With Ricky, I had the scare of my life because I was pulled out of a theater because he was involved in a shootout and taken to a hospital. I didn’t know if he was OK.

My eyes were filled with tears because I was so scared.

I thank God that Ricky was alright. He was not shot as was my first thought.

These days I attend these protest rallies because I want to respect the cause.

I have always been a fan of Dr. Martin Luther King — and peaceful protest.

I also want to see young people do the right thing.

I want them to know why they are there and not because “Joe from upstairs ” is going.

I also fear for the safety of our police officers and want people to understand that almost every one tries to do the right thing. Coming from the streets of the Bronx, Brooklyn and Queens, I’ve had my fair share of experience with NYPD and I will say that most of the time I thanked God that they were there.

The past couple of weeks were no different.

While I attended a rally with my Yankee cap on, I almost got into a bit of a scuffle with some young people who were looking only for trouble; they ignored all the peaceful protesting going on around them and wanted to spark violence.

In all honesty it was my Yankee cap, which many young people identify with, and the kindness and calm of others, including several police officers, that diffused a very ugly situation, helping instill calm.

And speaking of the Yankees, baseball, even on these streets, remains common-ground for discussons. The amount of Yankees hats that I saw in the crowd, from every walk of life, is astounding.

If baseball returns would it help ease tensions?

I’d like to think so, because it’s common-ground for so many.

We need the game just like we need healthy discussion, and we need the helping presence of good people in law enforcement. During our darkest moments in our country’s history, baseball was always there. I’m not saying that it will settle everything, but many of the protesters who know me always had the same question, “When is baseball coming back?”

As someone who has seen this escalating from so many sides, the community as well as from the badge, I am hopeful that we will all meet in a proper place. We need to listen, we need to learn and we need to grow together. It’s not easy. I have seen us overcome issues before and use sport, and baseball, as a unifying point, and I think we will again. Until that happens we need to be smart, be safe, and keep finding common ground.

I thank my kids and all who are in public service, and I thank all people for believing in America. I have great faith that we all just want to make it better.